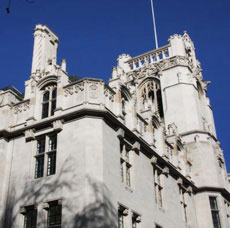 Built by Scottish architect James S Gibson (1864 – 1951) with Skipwith and Gordon, and sculptures by Henry Fehr, the building is situated opposite the Houses of Parliament and flanked by the Treasury and Westminster Abbey.  Gibson demonstrated a modern approach to his design by “keeping it quite distinct in scale and style so as to preserve its own individuality.”

Construction took place from 1906 to 1913, as one of a number of significant buildings constructed in the area at the early 1900’s, including the Government Offices in Great George St (now HM Treasury), the Methodist Central Hall, the Head Quarters of the Royal Institution of Chartered Surveyors, and the Institution of Civil Engineers.

The boldly massed building has a Portland stone exterior (load bearing with an internal steel frame) and a slate roof. Described as neo-Gothic with Flemish – Burgundian references it is influenced by Henry Wilson and Giles Scott in the concentration of carved ornamental stone balanced by a bare wall plane.

The building has three storeys, a basement and dormered attic storey with a steep hipped roof which is nine bays wide.

A tower, with large arched windows and lofty stone chimney stacks, rises above the building to the same height as the nearby parish church of St Margaret. The exterior is decorated with fine stone carvings and parapets and dormers that mirror Barry and Pugin’s Palace of Westminster.

Being of relatively modern construction, the building is in good condition, and the majority of its historic fabric, decoration and fixed furniture survive.