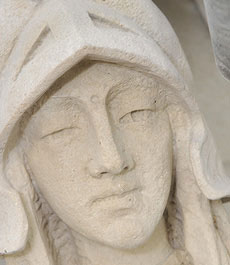 The exterior of the building is decorated with corner turrets, a piecework parapet, and many ornamental statues by sculptor Henry Fehr.

Stone sculptured details with deep figures encircle the building. The most impressive of these is the relief frieze above and to the sides of the entrance, extending over canted bay towers.

Scenes on the frieze include King John handing the Magna Carta to the barons at Runnymede, the granting of the charter of Westminster Abbey, and the Duke of Northumberland offering the crown of England to Lady Jane Grey.

On the upper part of the tower, there is a richly carved band of old English heraldic yales, lions, unicorns, with Tudor roses, thistles, shields and arms.  The gargoyle figures are four angels of the winds and the four angels of protection.  In a niche in the parapet is a figure representing government.

At the back of the building, the old stone gateway of Tothill Fields Bridewell prison is preserved.  This was moved in 1836 from the site now occupied by the Roman Catholic Westminster Cathedral, and is all that remains of this ancient house of correction.