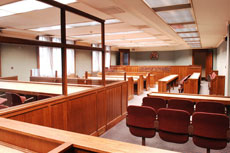 When the Government announced its intention to create a Supreme Court for the United Kingdom in 2003 the search began for suitable premises.

The senior Law Lord at the time, Lord Bingham of Cornhill, made it clear that The Supreme Court’s eventual home would need to reflect the reasoning behind this constitutional change:

“The creation of a Supreme Court is driven by the need for transparency and clarity in our constitutional arrangements.  Its setting should reflect the public right to come and see an institution which belongs to them, in action”.

The idea of a brand new building was quickly rejected for financial reasons, and more than 200 existing premises within one mile’s radius of Charing Cross were considered for conversion.  Over the following months the Middlesex Guildhall began to emerge as the best location, and it was confirmed as the home of the new Supreme Court at the end of 2004.

Importantly, the Middlesex Guildhall already provided many of the key design requirements of a modern Supreme Court, including 6000 square metres of internal space.

During its evolution, the building had seen many internal changes.  When Middlesex County Council was dissolved in 1965, and its function was taken over by the GLC, the Guildhall was extensively altered for use as a Crown Court centre. By the end of the 1980s, the Crown Court housed no fewer than seven court rooms, as well as administrative offices and 100 cells for prisoners.

Sensitive renovation would improve access to this historic yet tired Grade II* listed building and secure its long-term future as the home of The Supreme Court, a modern institution on a world stage.