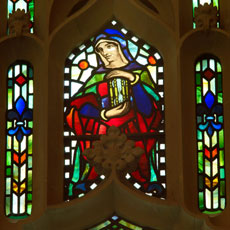 The Supreme Court building stands on the western edge of Thorney Island, on a site which was originally part of the grounds of Westminster Abbey.

Thorney Island, also known as “the island of briars”, was a slightly elevated area of land in the delta of the Tyburn stream.  Now culverted over, one arm of this lost London river entered the Thames below Westminster Bridge, while the other joined it above the present Houses of Parliament. Edward the Confessor lived here while he was building his church of St Peter’s on the site where Westminster Abbey now stands.

The site lies within the Lundenwic and Thorney Island Area of Special Archaeological Priority, as defined in the City of Westminster Unitary Development Plan. A desk-based Archaeological Assessment from the Museum of London Archaeological Service (MoLAS), commissioned by HM Court Service and published in March 2005, describes the site as having been subject to continuous development from at least the medieval period onwards as part of the Westminster Abbey precinct.

The building is on the site of a 13th century belfry that was converted to tenements at the Dissolution. Evidence of this building was recorded both in 1775, when it was demolished, and in 1912 when its foundations were exposed (and possibly dynamited) during the construction of the present Guildhall. Remains of piled foundations used for the belfry and medieval and Saxon features may still exist beneath the present foundations.

Today, the building stands over the remains of two previous Guildhall buildings dating to the early and late 19th century.