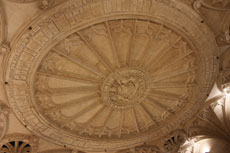 The original entrance hall was modest in size and decoration. The walls in the entrance and grand staircase are plaster, painted to look like stonework. Architectural writer Peter Cormack believes this was designed to increase ‘the impact of other spaces within the building’ such as the court rooms and council chamber. The centrepiece of the entrance hall was a marble bust of Edward VII by P. Bryant Baker, which has now been relocated to The Supreme Court exhibition and café area.

In the original Guildhall the Court functions were confined to the ground floor. The two principal court rooms were double height with impressive ceilings. One, which is now The Supreme Court library, has a striking vaulted fan ceiling with the Royal Coat of Arms at the centre. The other, now Court Three, has beautifully moulded timber beams and tall perpendicular style windows bearing amorial stained glass.

Gibson designed two substantial open courtyards, or light wells, to allow light into the building and show off the abundance of intricate stained glass.

The second floor was designed for use by the County Council and its officials. The original Council Chamber, now Court One, was designed to seat 104 Councillors and retains the galleries where the public and media would be able to watch proceedings. The majestic original hammer beam ceiling, embellished with wooden carvings, as well as the original light fittings, have all been carefully restored. The stained glass windows bear the amorial glass of the Lord Lieutenants of Middlesex.