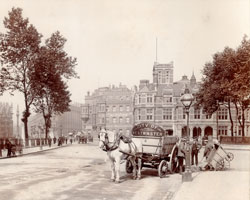 1 October 2009 marked a defining moment in the constitutional history of the United Kingdom with the separation of judicial power from its historic home in the nation's legislature, the Houses of Parliament, and its transfer to the Supreme Court's own building.

Part 3 of the Constitutional Reform Act 2005 had provided for the Court's legal existence. This then came into legal effect when the newly restored building was ready for its new purpose.

By moving to the historic setting of the former Middlesex Guildhall, the Supreme Court took its place in the cluster of official state buildings that surround the edges of Parliament Square; the Houses of Parliament, Westminster Abbey and the Treasury.

Since its opening in 2009, the Supreme Court has continued to fulfil its role as the final appeal court adjudicating in cases of the greatest public importance. One of the major benefits of moving the Court into its own building is that public access, both physically and virtually through the live streaming of cases on our website, is considerably improved.

You can find out more about the historic role of the Appellate Committee of the House of Lords.

Further information about the Court's historic building, the Middlesex Guildhall.