Non-executive directors play an important role in the governance of the Supreme Court and JCPC. They provide independent insight and an experienced voice at Management Board level to complement our executive team.

The Supreme Court and JCPC has two non-executive directors. 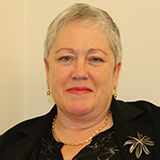 Kathryn was appointed as a non-executive director of the UK Supreme Court in October 2017 and is the Chair of our Audit and Risk Committee.

Tim was appointed as a non-executive director of the UK Supreme Court in August 2019.

He has a background in leading corporate IT and in project management, and has worked as a university lecturer. He is a Chartered Engineer, Fellow of the British Computer Society, and a Fellow of the Higher Education Authority.

His experience includes working for large public sector organisations such as Royal Mail and the NHS, as well as for smaller private sector companies. Tim recently returned to university to study for a Master's in Finance and Accounting.

Tim is also a non-executive director and member of the audit and risk committee for a large housing provider in the East Midlands.

As well as being a member of the Management Board and Audit and Risk Committee, Tim chairs the UKSC Remuneration Committee.