Lord Justice Carnwath to be sworn in as Supreme Court Justice 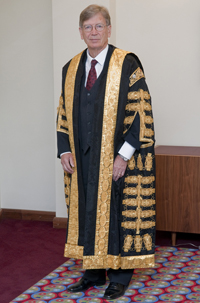 The senior judge responsible for delivering major reform of the tribunal system across the UK over the last five years will tomorrow take on a new role, swapping leadership of a dedicated team of 5,000 office-holders for a seat on the UK's highest court, shaping the interpretation and direction of the law of the land.

Lord Justice Carnwath CVO will be sworn in as a Justice of the Supreme Court tomorrow morning during a brief ceremony at the Parliament Square court building. Courtroom One is expected to be full to capacity with family, friends and former colleagues from the tribunal judiciary, which he has led since 2007, and the Law Commission, where he served as Chairman between 1998 and 2002.

His appointment follows the retirement of Lord Brown at Easter.

Lord Phillips, President of the Supreme Court, will conduct the ceremony in which Lord Justice Carnwath will take the Judicial Oath and Oath of Allegiance in front of other Supreme Court Justices, each dressed in their ceremonial robes. It has become tradition for a new Justice to shake hands with each of their fellow Justices in turn, before bowing to them. The bench of Justices will then bow to the new Justice in return.

Following the ceremony, Lord Justice Carnwath will be styled Lord Carnwath of Notting Hill, according to Her Majesty The Queen's declaration in December 2010 that all Supreme Court Justices will be styled as 'Lord' or 'Lady' for life, regardless of whether they hold a peerage.

Lord Carnwath (as he will then be styled) will begin sitting on Wednesday, among a panel of five Justices sitting as the Judicial Committee of the Privy Council hearing a historic land title dispute case from the Cook Islands.

Lord Justice Carnwath has, since 2007, been the Senior President of Tribunals and led the planning an implementation of the reforms of the tribunal system following the Leggatt report. He has sat as a Lord Justice in the Court of Appeal (Civil) since 2002, was a judge of the Chancery Division from 1994 to 2002 during which time (1998 to 2002) he was Chairman of the Law Commission.

His appointment to the Supreme Court was announced by 10 Downing Street on 20 December 2011.

The swearing-in ceremony begins at 11.30am and lasts around five minutes. It will be broadcast live over the internet through the streaming service offered by Sky News.

Formal photographs of Lord Carnwath will be available on request from the contact below, following the ceremony.