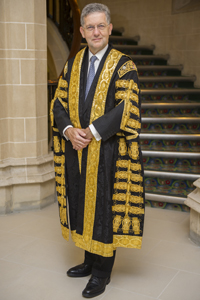 Lord Hodge will be sworn in as a Supreme Court Justice tomorrow, joining the UK's highest court at the start of its fifth year.

Family and friends will convene in Courtroom One at around 10am for a short swearing-in ceremony: Lord Hodge will take the Judicial Oath and Oath of Allegiance before ten of his fellow Justices of the Supreme Court, all dressed in ceremonial black and gold robes. The Justices will later process to Westminster Abbey for the service marking the opening of the legal year in England and Wales.

Lord Hodge's appointment follows the retirement of Lord Hope after seventeen years' service with the House of Lords and latterly the Supreme Court. He joins Lord Reed as the Scottish members of the Court and so continues the long-standing convention that the at least two of the Court's Justices should have comprehensive experience of the Scottish legal system.

Lord Hodge was appointed a Senator of the College of Justice in 2005, and has since sat in both the Court of Session and High Court of Justiciary in Edinburgh. He will first hear a case from Scotland concerning mental health legislation next week.

Lord Hodge also has a new role sitting on the Judicial Committee of the Privy Council (JCPC), also based at the former Middlesex Guildhall in Parliament Square since 2009. The Committee serves as the court of final appeal for the UK overseas territories, Crown dependencies and for certain Commonwealth countries.