New President of the Supreme Court 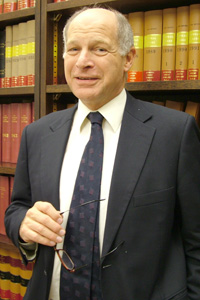 Lord Neuberger of Abbotsbury, currently Master of the Rolls, has today been named as the next President of the Supreme Court of the United Kingdom.

Lord Neuberger will succeed Lord Phillips of Worth Matravers, who steps down from the role as the most senior judge in the United Kingdom on 30 September 2012. The new President will be sworn in at a special ceremony at the Court on 1 October 2012.

Lord Neuberger said today: "It is a great honour to have been given the opportunity to serve as the President of the UK Supreme Court and to work with the eleven other distinguished members of the Court. The UK Supreme Court, like its predecessor, the Appellate Committee of the House of Lords, is rightly respected throughout the world.

"Together with the other members of the Court, I will do my best to ensure that it continues to play its proper role in upholding the rule of law, and applying and developing the law in a coherent and principled and practical way, appropriate for today's world."

The office of President of the Supreme Court is a wide-ranging one. In addition to his judicial responsibilities, which involve appeals to the UK Supreme Court and to the Judicial Committee of the Privy Council (the final appeal court for a number of members of the Commonwealth and some other jurisdictions), the President has leadership, ambassadorial and administrative responsibilities. In particular the President is responsible for leading discussions with the Lord Chancellor over policy and resource issues that affect the Supreme Court. He may also appear before Select Committees of the UK Parliament.

The Rt. Hon. Lord Neuberger of Abbotsbury has held the office of Master of the Rolls and Head of Civil Justice (the second most senior judge in England and Wales) from 1 October 2009. Before that, from 2007, Lord Neuberger was a Lord of Appeal in Ordinary ("Law Lord"), after serving for three years as a Lord Justice of Appeal.

In 2006 - 2007 led an investigation for the Bar Council into widening access to the barristers' profession. He set up and chaired a committee which reported in May 2011 on the practice and procedure relating to super-injunctions.

Lord Neuberger's first judicial appointment was as a Recorder from 1990 until 1996, when he was appointed a judge of the Chancery Division of the High Court of England and Wales. He was the Supervising Chancery Judge for the Midland, Wales and Chester, and Western Circuits between 2001and 2004.

His appointment as President of the Supreme Court was made by Her Majesty The Queen on the advice of the Prime Minister and Lord Chancellor, following the recommendation of an independent selection commission chaired by Lord Phillips. The commission consulted across each of the Supreme Court's three UK jurisdictions before making its recommendation.

Lord Phillips welcomed today's announcement, commenting: "Identifying a successor to lead the Supreme Court into the next phase of its life was inevitably a task I approached with mixed feelings - a degree of pride in preparing to hand over leadership of an organisation which has maintained a smooth and efficient service as the UK's highest court following the significant changes brought about by the Constitutional Reform Act, but also an element of sadness in leaving that same organisation.

"But in Lord Neuberger I know we have an extremely talented new President, who brings not only a wealth of judicial experience but the ability to lead a collegiate court. I wish him all the very best and I only hope that he enjoys this very special honour as much as I have."

The appointments were announced today by 10 Downing Street. The official announcement can be viewed on the Number 10 website.