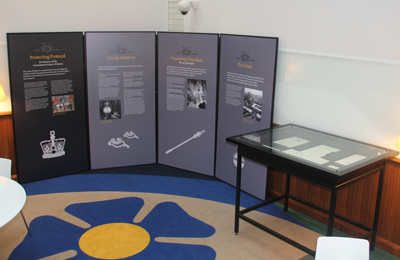 The Court of Claims exhibition, on show until Spring 2013

The issue sounds like a particularly tricky quiz question: who has the honour of finding a glove for the right hand of a new Monarch on the day they are crowned?

In fact, the answer to that (whoever owns the Manor of Worksop, Nottinghamshire) and the identities of others who have the right to take part in the Coronation Service of a new Monarch is the subject of a new exhibition which opens at the Supreme Court in central London this week.

The display marks the 60th anniversary of the last meeting of theÂ Court of Claims, an ancient court set up to hear petitions from those who believe they have the right to perform a particular honorific service for a new Monarch on their Coronation day. It last sat during the final weeks of 1952, ahead of the Coronation of Her Majesty Queen Elizabeth II.

On that occasion, the Court had to consider claims including those from the Lord High Steward of Ireland to carry a white wand at the Coronation; from a number of peers seeking to carry the 'Great Gold Spurs'; and from the Duke of Somerset to carry the Orb or Sceptre for the new Queen.

The first recorded use of the Court of Claims was in 1377, when John of Gaunt, the uncle to a ten-year old Richard II, decided who would carry out which task during the infant king's coronation. The role gradually passed to a special Commission called together for the purpose. The Commissioners comprise a large body including members of the Royal Household, peers, senior judges and military personnel. Any five or more of this group are selected to form the Court of Claims.

The exhibition is located in the cafÃ© area of the Supreme Court on Parliament Square, and will be on display until the spring. It explains the different types of claims heard by the Court and highlights some of the more interesting disputes it has considered during its long history. It also features original documents from the last sitting of the Court of Claims, including a petition submitted by Winston Churchill on behalf of the Barons of the Cinque Ports.

Jenny Rowe, Chief Executive of the Supreme Court, said: "The sixtieth anniversary since the last Court of Claims presents an opportunity to review its deep symbolic role in our constitution. The petitions considered by the Court may initially seem slightly obscure or even trivial. But its very existence sends an important message about the Monarch's commitment to upholding the rule of law across the countries over which they reign - and the faith they hold in properly administered courts to help sustain a stable, safe and prosperous society."