A new artwork celebrating one hundred years of women in law and commemorating the centenary of the Sex Disqualification (Removal) Act has been unveiled in the Supreme Court. The artwork was commissioned by Spark 21, the charity which manages the First 100 Years campaign. Created by the internationally recognised artist, Catherine Yass, Legacy features portraits of three female legal pioneers. 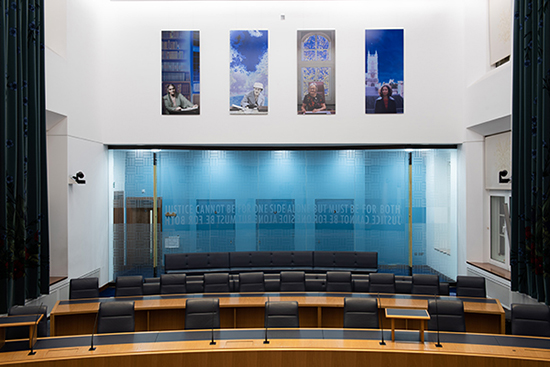 The first pioneer is Cornelia Sorabji, the first woman to sit the Bachelor of Civil Laws exam at Oxford University, and who often acted without charge to represent poor women in India. The second panel portrays Dame Rose Heilbron, one of the first two women to gain a first-class honours degree in law in 1935 and who secured the right of women to withhold their identity in rape cases. The third panel features the first woman President of the Supreme Court Baroness Hale of Richmond DBE. A fourth image shows an unnamed student, representing the potential of the next generation of women lawyers to shape our society through their practice and reforms.

The artist has worked with archival photographic images as well as her own photography to create the work that documents both the progression of women in the law over 100 years and the development of photography in the same period. The four portraits form part of a larger group composition, reflecting the nature of women's emancipation movements globally.

Catherine Yass trained at the Slade School of Art in London, the Hochschüle der Künst in Berlin and Goldsmiths College, London. She is represented by Alison Jacques Gallery and known for her films and brightly coloured photographs, which have often depicted the people and institutions who commissioned, supported, or curated her work.

The artist was chosen through a competitive process and was judged by a panel that included Baroness Hale, President of the Supreme Court, Mark Ormerod, chief executive of the Supreme Court and Dana Denis-Smith and David Standish from Spark 21, the charity behind the First 100 Years project.