Lady Hale to be next Deputy President of Supreme Court 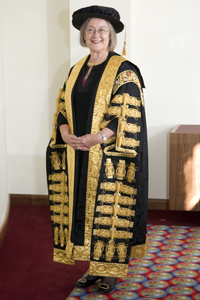 Baroness Hale of Richmond has been appointed Deputy President of the Supreme Court, it was announced today.

"It is an honour and a privilege to have been chosen to follow Lord Hope, who has made such a success of the role in the transition from the House of Lords to the Supreme Court. I look forward to continuing and building upon the work which he has done to establish this great new institution in our national life," said Lady Hale.

After graduating from Cambridge, Lady Hale taught law at Manchester University from 1966 to 1984, also qualifying as a barrister and practising at the Manchester Bar. She specialised in Family and Social Welfare law, was founding editor of the Journal of Social Welfare and Family Law, and authored a pioneering case book on 'The Family, Law and Society'. In 1984 she was the first woman to be appointed to the Law Commission.

"Lady Hale brings an exceptional range of experience from almost 20 years as a senior judge, following time spent in academia and law reform work. Throughout that time she has made significant contribution to the development of the law in many areas, particularly in family and mental health. She has also done much to promote the importance of diversity in the judiciary. I look forward to working closely with her," said Lord Neuberger.

The role of Deputy President involves working alongside the President to oversee the judicial work of the Court, and liaising closely with Chief Executive who manages the Court's administration. The Deputy President also shares a wider leadership and ambassadorial role with the President, undertaking a range of engagements to promote understanding of the role of the judiciary and senior appellate courts in the UK and to foster international links.

Lady Hale will assume the responsibilities of Deputy President on Friday 28 June, following Lord Hope's retirement the day before. She will be sworn in at a special ceremony on a date to be announced.