President of the Supreme Court of the United Kingdom

Justices of the Supreme Court of the United Kingdom

Please note that the closing date was midday on Friday 1 March 2019 - applications are now closed.

The selection commissions for the appointment of a new President and two, possibly three, Justices of the UK Supreme Court today launch their recruitment campaigns.

Lady Hale, President of the Court, will retire in January 2020, and Lord Carnwath and Lord Wilson will reach the statutory retirement age in March 2020 in May 2020. The successful candidate for President and new Justices will take up office between January and May 2020.

Lady Hale, President of the Court, will retire in January 2020, and Lord Carnwath and Lord Wilson will reach the statutory retirement age in March 2020 in May 2020. The successful candidate for President and new Justices will take up office between January and May 2020.

The UK Supreme Court and Judicial Committee of the Privy Council hear a wide range of very complex and high profile legal appeals, which can have considerable impact across the United Kingdom and beyond. The withdrawal of the UK from the EU makes this a particularly important time at which to lead the Court as President or to be appointed a Justice.

All those appointed need to be people of truly exceptional intellectual and legal ability, with sound judgment and decisiveness. In addition, the President of the Supreme Court, as the highest UK judicial office, with a national and international profile, will need to demonstrate the communication and leadership skills to lead the Court through an increasingly complex judicial and constitutional environment.

The selection commissions are looking for candidates who can show an ability to contribute to the collegiate decision-making of the Court, a sensitivity to the needs of different communities and groups and an ability and willingness to engage in the wider representational and leadership role of a Justice, together with an appreciation of the developing nature of the constitution and law in England, Scotland, Northern Ireland and Wales.

The statutory minimum qualification for all appointments advertised is to have held high judicial office for a period of at least two years, to have satisfied the judicial appointment eligibility condition on a 15-year basis or to have been a qualifying practitioner for at least 15 years. In making its recommendation the selection commissions will have regard to the requirements of the Constitutional Reform Act 2005 (as amended by the Crime and Courts Act 2013) that a selection must be on merit, and that the commission must "ensure that between them the Judges will have knowledge of, and experience of practice in, the law of each part of the United Kingdom."

Applications are sought from a wide range of candidates, including those who are not currently full-time judges, and particularly those who will increase the diversity of the Court. The competition is open to candidates from any part of the United Kingdom and with any professional background which meets the statutory criteria for appointment.

An application form and application monitoring form are available for completion for either or both of the roles of President and Justice.

The Supreme Court will host familiarisation visits for potential candidates. These will include an opportunity to sit in court and follow proceedings for up to two hours; and/or a private meeting with a current Justice (not directly involved in the appointments process) to discuss the nature, challenges and highlights of the role. Expressions of interest may be submitted until 22 February 2019.

Further information which may be of interest to applicants 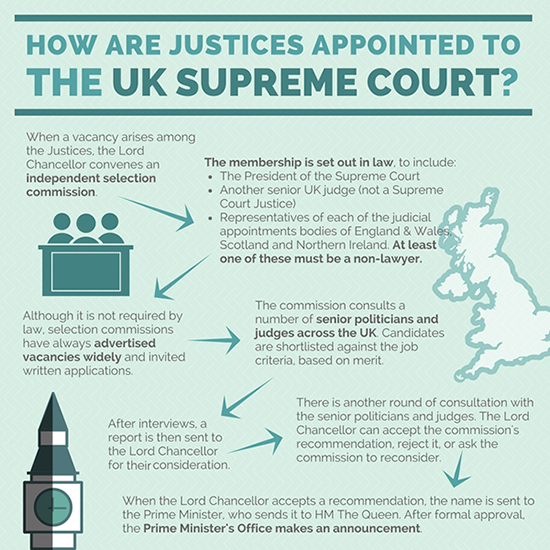 Much of the selection process is set out in statute, namely the Constitutional Reform Act 2005 (as amended by the Crime and Courts Act 2013).

In short, the steps undertaken by the independent selection commissions (once convened by the Lord Chancellor) are:

A more detailed description of the process is also available on our Appointments of Justices section.