Jonathan Sumption QC to be sworn in as Supreme Court Justice 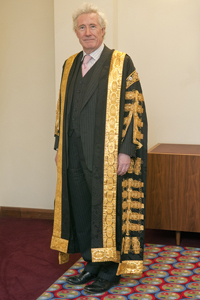 Jonathan Sumption QC will tomorrow be sworn in as a Justice of the Supreme Court, joining ten of the most senior judges in the United Kingdom after a brief ceremony at the Parliament Square court building.

Mr Sumption follows Lord Dyson and Lord Wilson as the third Justice to be sworn-in since the Supreme Court was inaugurated in October 2009. His appointment follows the retirement of Lord Collins last year.

Lord Phillips, President of the Supreme Court, will conduct the ceremony in which Mr Sumption will take the Judicial Oath and Oath of Allegiance in front of other Supreme Court Justices dressed in their ceremonial robes, as well as friends, family and other guests. It has become tradition for a new Justice to shake hands with each of their fellow Justices in turn, before bowing to them. The bench of Justices will then bow to the new Justice in return.

Following the ceremony, Mr Sumption will be styled Lord Sumption, according to Her Majesty The Queen's declaration in December 2010 that all Supreme Court Justices will be styled as 'Lord' or 'Lady' for life, regardless of whether they hold a peerage.

It was announced in December 2011 that Mr Sumption was to join Her Majesty's most Honourable Privy Council, enabling him to sit on appeals before the Judicial Committee of the Privy Council (JCPC). The JCPC is co-located with the Supreme Court, hearing appeals from a number of Commonwealth countries, Crown dependencies and other jurisdictions.

Lord Sumption (as he will then be styled) will begin sitting on Thursday 12 January, among a panel of five Justices hearing the shipping dispute case of Petroleo Brasileiro S.A. v E.N.E. Kos 1 Limited.

The Supreme Court today also announces that Lord Reed, whose appointment was announced on 20 December 2011, will be sworn-in as a Justice on 6 February 2012.

His appointment to the Supreme Court was announced by 10 Downing Street on 4 May 2011.

The swearing-in ceremony begins at 10am and lasts around five minutes. It will be broadcast live over the internet through the streaming service offered by Sky News.

Formal photographs of Jonathan Sumption will be available on request from the contacts below, following the ceremony.