The highest court in the land will welcome two new judges at a swearing-in ceremony tomorrow. Lord Justice Hughes and Lord Justice Toulson are joining The Supreme Court of the United Kingdom from the Court of Appeal of England and Wales, following their appointment by Her Majesty The Queen in February 2013.

Family, friends and former colleagues will gather in the grand setting of Courtroom One to watch the new Justices take the Judicial Oath and Oath of Allegiance in their ceremonial black and gold robes before their ten fellow Justices of the Supreme Court.

Lord Justice Hughes succeeds Lord Dyson, appointed Master in the Rolls in October 2012, and will take the judicial title of Lord Hughes of Ombersley. A member of the Court of Appeal of England and Wales since 2006, Lord Justice Hughes is currently Vice-President of its Criminal Division.

Both Justices will also sit on the Judicial Committee of the Privy Council (JCPC), also based at the former Middlesex Guildhall in Parliament Square since 2009. The Committee serves as the court of final appeal for the UK overseas territories, Crown dependencies and for certain Commonwealth countries. 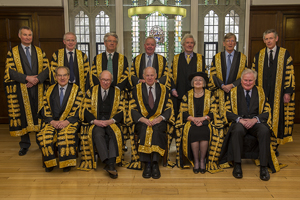 The appointment was announced by 10 Downing Street on 26 February 2013.