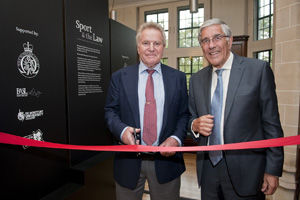 How did football transfer deals become such big business, when can you sue a cricket club for letting balls damage your house, and why is Oscar Pistorius being allowed to compete in this year's Olympic Games - all these legal questions are many more are explored in a major new exhibition which opened to the public today at the UK's highest court.

'Playing by the Rules - Sport and the Law' offers an introduction to how the legal profession has helped support the development and financing of sport over the years, looking at issues such as ethics, anti-doping, commercialisation, branding and the role of the Court of Arbitration for Sport.

Developed in partnership with academics from De Montfort University (DMU) in Leicester and the British Association for Sport and Law (BASL), the exhibition forms part of the official programme of events inspired by the London 2012 Games. It was officially opened last night at the Parliament Square home of the UK Supreme Court by Swiss IOC member Denis Oswald, and Lord Phillips, President of the Supreme Court.

Speaking at the event, Lord Phillips said: "Lawyers manage to get in on every area of life, and sport is certainly no exception. Our exhibition aims to raise some of the big issues that have emerged as sport has become more professional. Unusually for this place, we make no judgments about the topics that are explored. We provide the evidence and leave it to you to make the judgments."

The Supreme Court's magnificient wood-panelled lobby will play host to the exhibition for the next two months, while the court is in recess for summer.

The thirty panels and accompanying materials include: 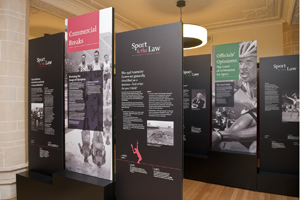 Our Sport and the Law exhibition is ready to welcome visitors

A quiz and creative activities based on the topic of fair play in sport are also available for younger visitors.

The exhibition is now open to the public from 9.30am - 4.30pm on weekdays until the end of September. Admission is free.